John Bentley, one of the volunteers contributing to this project, writes about his day with Raymond Calvert at Hoggarths Farm.

I’ve always admired the work of the photojournalists who, in the pre-television days, provided ‘photo-stories’ for long-gone magazines like ‘Picture Post’ and ‘Life’. One particular photographer I admire is W. Eugene Smith, who, in the 1950s, made beautiful records of the work of a country doctor and life in a Spanish village, among other topics. A photograph really can be worth a thousand words, as they say, and has the power to capture life and landscape at any particular time and place. So it’s wonderful to be able to follow in this tradition and to have the opportunity to document aspects of Dales farming by following the activities on a farm in upper Swaledale for one day during the lambing season. 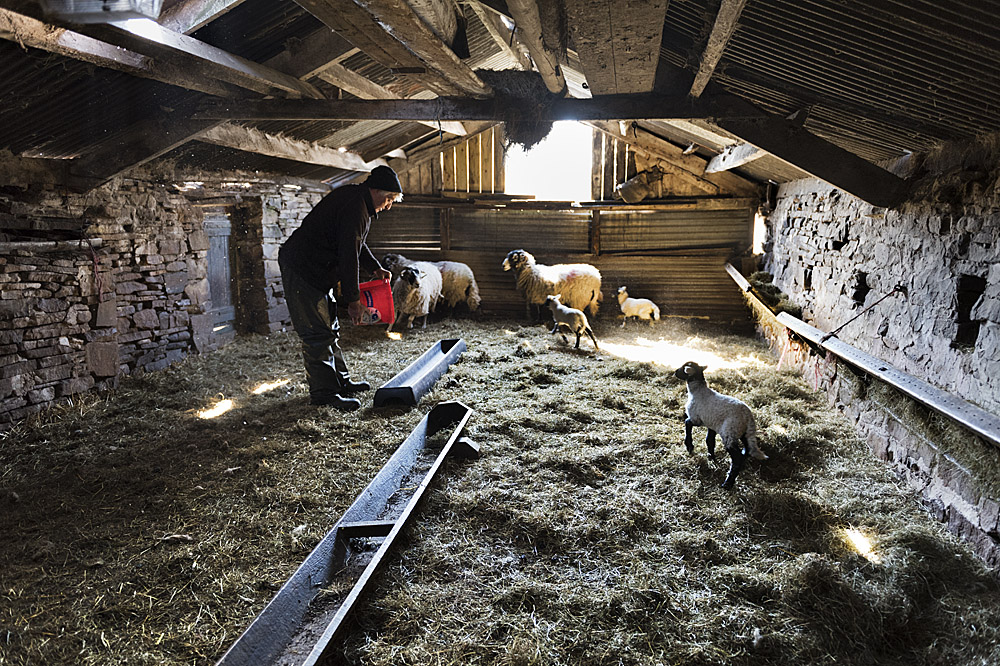 Hoggarth’s Farm is set in a stunning upland landscape on the road from Keld to Kirkby Stephen. Lambing is a busy time of year, especially when you have several hundred sheep, with new lambs being born every day. As I arrive at the farm, I’m briefly but cordially greeted by a busy Raymond Calvert and it’s a matter of quickly grabbing my camera and following him into the barn as he does the rounds feeding the sheep and their young lambs and also the small number of cattle that are still wintering under-cover in the barn.

Meanwhile Raymond’s son, Andrew, attends to a newly-born tup, which is still struggling to its feet. Andrew is the fourth generation of the family to farm at Hoggarths. He tells me that the new-born is larger than most and hence it takes longer to get on his feet than the average lamb. He turns the mother sheep on her end and helps the young tup take milk from his mother’s teats. The warm milk helps invigorate him and he’s soon looking more confident on his feet.

Then, joined by Raymond’s brother, Chris, we make a short trip on two quad-bikes up the road to collect sheep and lambs from a paddock to bring them back to the farm for tagging and medication. The farm dogs follow, two of them riding on Raymond’s quad bike. They really seem to relish the ride and, in truth, Raymond is a bit of a softy with his dogs and enjoys having them on-board. With the help of the dogs, the sheep are driven back along the road to the farm. A few sheep and their lambs decide they want to go elsewhere and there is a bit of dodging around to get them back on track to the farm. The dogs sometimes have a job standing their ground when some of the sheep become determined to escape. Eventually, after some minor hold-ups for passing motorists, the sheep are all back in the farm paddock. 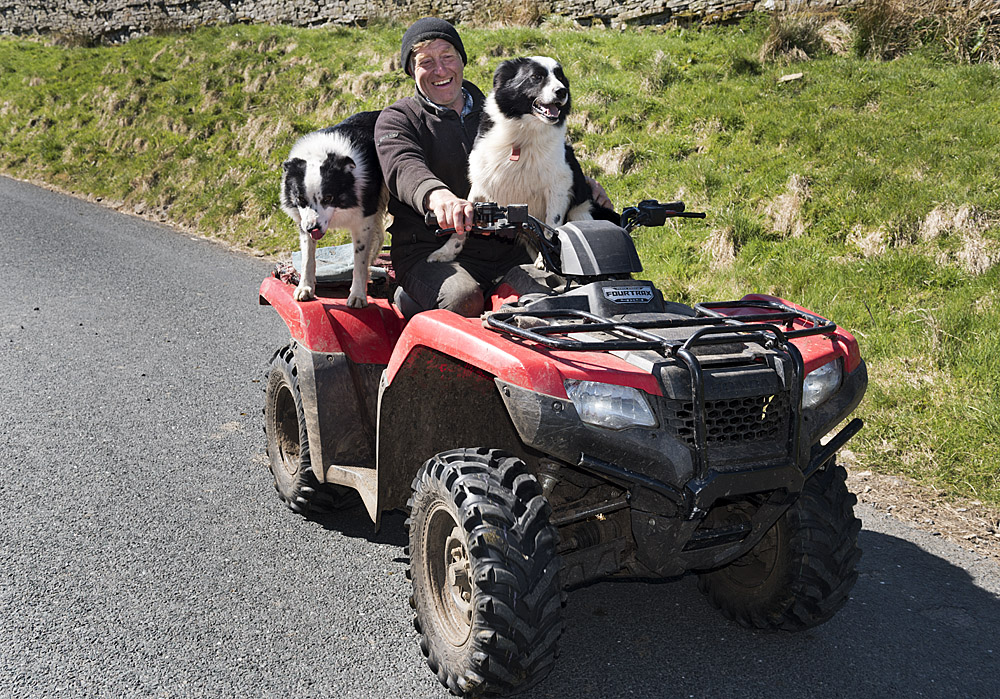 The next job is to gradually filter a small number of sheep and their lambs into the farm enclosure from the paddock. The difficult bit is to keep the lambs together with their own mothers. This requires patience, concentration and more help from the ever-keen dogs. The sheep and their lambs go through a foot bath and into a small walled enclosure where they are marked with paint for identification. The new lambs are given two tags, one in each ear, and sheep and lambs are given medication against diseases. This is a long and very manual job that takes much of the day. The process has to be meticulously carried out, with the tagging recorded in a log-book.

As batches of sheep are processed they are loaded onto a tractor and trailer and Andrew then drives them up to the moors for release. The sheep are hefted, which means that individual groups have to be taken back to specific areas of moorland where they spend much of the year.

Around five o’clock it’s time to stop the tagging process for the day and attend to other farm duties. Raymond is on his quad bike again and shooting around his fields checking and feeding sheep and lambs. The sheep and lambs gather around as he arrives in each field and scatters a tasty trail of sugar-beet granules. In the process he spots a lamb that has got on the wrong side of the fence from its mother, and re-unites the pair. 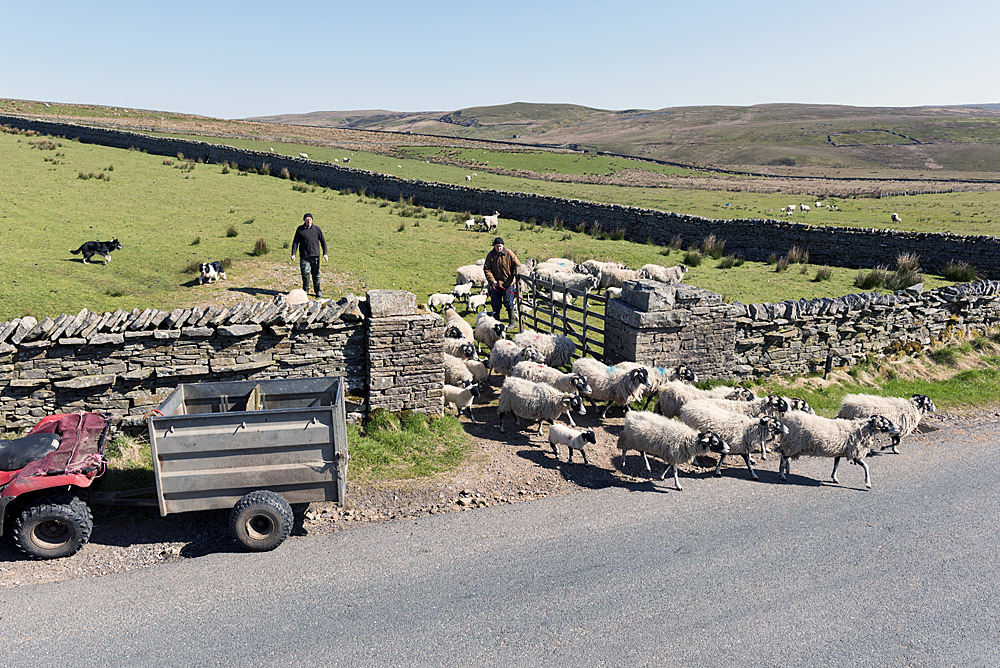 All photographs by John Bentley

Hi! I am Chris Calvert’s wife and would like to know if it is possible to have copies of two of the photographs in this article. The one with Chris and Raymond in the pens with the tins etc as they record the lambs and the last one of them bringing the sheep and lambs through the gate. We love the article, by the way! Many thanks. P.S. I also like the idea of ‘photo stories’ which I use all the time on my blog which is mainly farming based. You can find it on my website http://www.upperswaledaleholidays.co.uk in the
Social drop down menu.