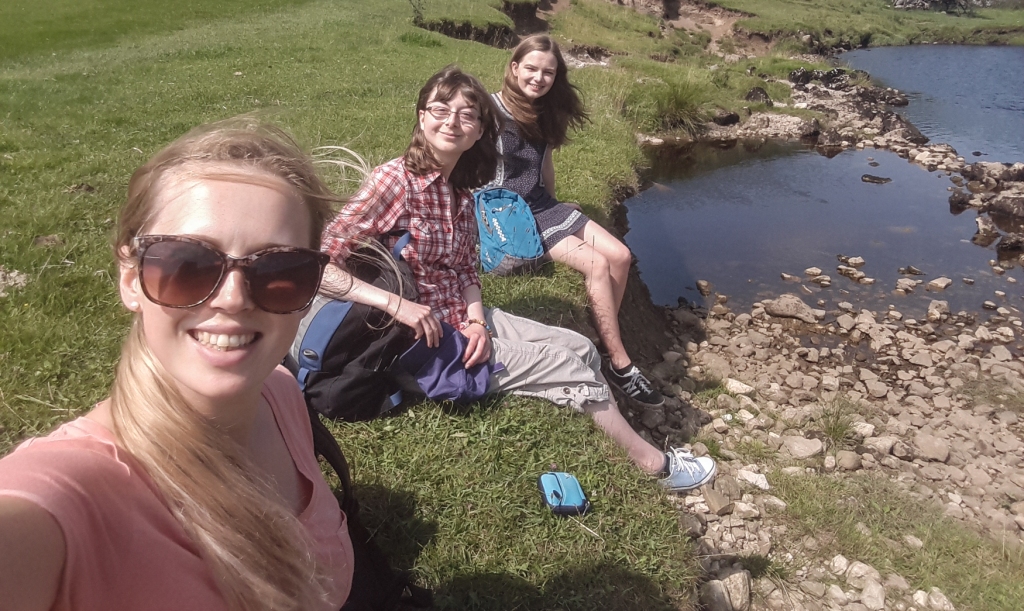 The ripples of a project like this one often go further than you think. We knew that the students from Leeds University who took part in the research, who delved into the collections at the Dales Countryside Museum, met farmers, and roamed the Dales, had loved their experience, but perhaps we didn’t appreciate just quite how significant the impact might be. So when we received this letter from Lauren Hunter, we wanted to share it – read on to discover how she was affected by her involvement. 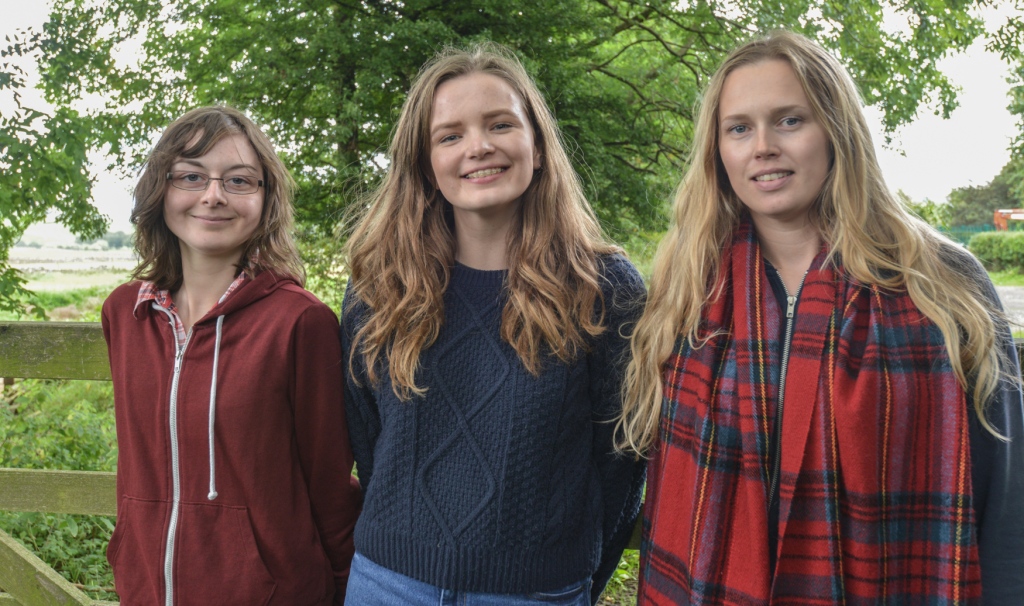 Leeds University who took part in the project. From left Emily, Holly and Lauren.

Coming from Barnsley in South Yorkshire, quite an industrial part of the country with populous towns, I have always lived relatively close to the Yorkshire Dales, but never really got up close to them.  Barnsley is a post-mining community in which the service and manufacturing industries have taken over, and it’s getting more and more urbanised as each year passes.   I remember visiting North Yorkshire as a child aged about 10 years, staying above a café in Hawes and being entranced by the green-brown fells and miles of grey drystone walls, but previous to starting the Voices from the Land project I had not been back.  As an adult, I had little useful memory of the places I visited, apart from a general sense that they were green and embodied a kind of freedom.  I therefore saw it as a social and geographical ‘other’, an upper class, traditional and quite ‘posh’ place; maybe this was influenced by media portrayals, such as depictions of boutique shopping and afternoon tea shops in Harrogate and York. 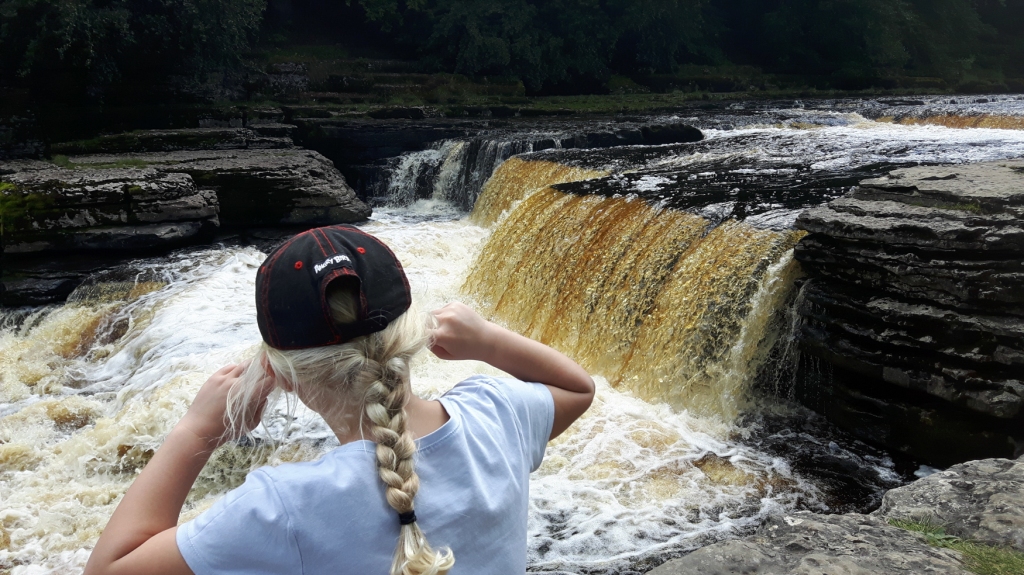 Lauren visits Aysgarth with her children.

So why did I want to take part in Voices from the Land?  I had always liked the countryside: as a small child my bedroom window had looked onto an orchard and the farmer’s field’s beyond, and I could see the Pennines in the far distance.  I also went for riding lessons at a semi-rural equestrian centre and had no fear of large animals, and knew the connections that could be built between humans and the animals they care for.  Now I wanted to see the reality of life in that countryside, get closer and take part, or at least see it in action and take part in the recording of it.  I wanted to travel through the beautiful scenery, and meet the people that live and work there, to get closer and see what they do, and what they have done for generations.

“My sense of self and place of origin was affected by doing this project.  It opened up a whole new other side of me: I too was connected to the land, I had been in it and had taken part in the recording of its story.”

After spending time in the Yorkshire Dales last summer, I realised that my previous conception of North Yorkshire as a ‘posh’ and inaccessible place was incorrect.  The people are firmly of the contemporary world just as we townies are, and have many of the same concerns: political events affect their livelihoods, there are social issues within the towns and villages, and they face day-to-day problems in their work.  As I drove through the different villages and saw real people, shops, tourists, people from all walks of life, I felt an affinity with them that transcended the cultural gap I had created in my own mind.  The farmers and local people I met were not at all aloof or unfriendly: they were positively welcoming and eager to tell their stories.  They talked about their work, their animals, their ancestors and how they had come to be farming on this particular spot.  They discussed current political issues such as Brexit, and conjectured the future of upland farming in Britain.  They offered us tea, coffee and cake, and recommended places where we might enjoy a walk and spectacular views.  They were real people, just like me, in a real, living and working place.  And all this was in Yorkshire – I was still inside my home county!  My sense of self and place of origin was affected by doing this project.  It opened up a whole new other side of me: I too was connected to the land, I had been in it and had taken part in the recording of its story. 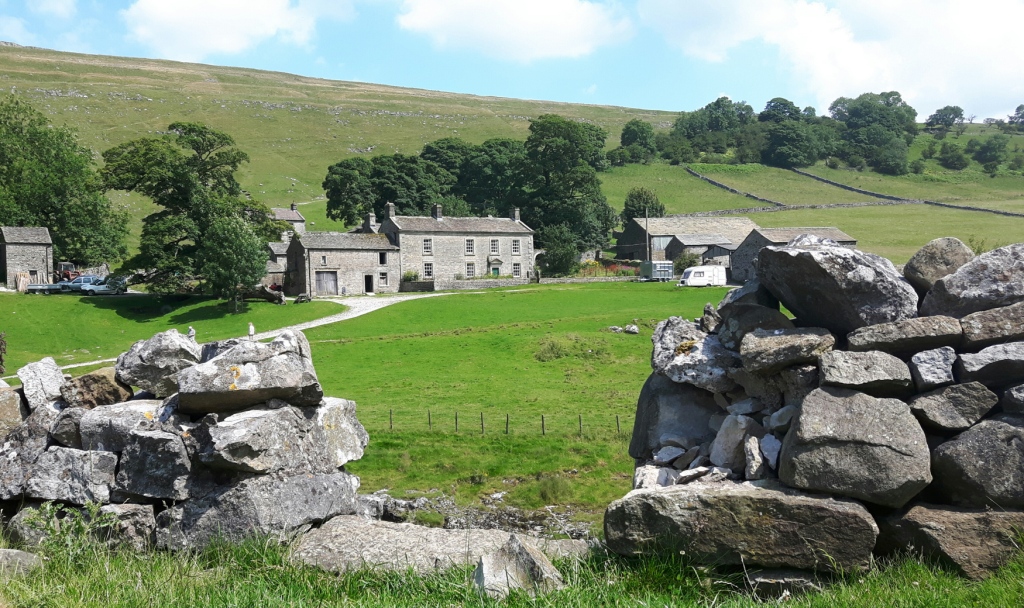 The experience of taking part in the project has also marked its place within my university studies.  I am studying for an English Literature and History degree; therefore I am naturally quite an avid reader.  At the beginning of the Voices from the Land project, I borrowed Life and Tradition in the Yorkshire Dales by Marie Hartley from the university library.  I read this over a couple of days, and then went back for omnibus editions of James Herriot.  I wanted to read all about the Dales, the history and tradition of the area.  As a literature student I am drawn to discovering new things through a literary lens.  In the pages of these books I was transported back to the historical Dales by the depictions of real-life situations, and the descriptions of persons, places and traditional practices within the texts.  These books may perhaps be accused of presenting the past in a romantic and nostalgic manner, but I was aware of this risk and accordingly wanted to juxtapose these historicised perceptions with some more contemporary literature upon the same topic.  I have since read James Rebanks and Amanda Owen, among others, and these books seemed to me to reconcile the twin worlds of farming and country life, and the demands of the modern world: Amanda is something of a celebrity and has to combine her rural lifestyle with her career as a writer and raising her children, and James Rebanks describes his temporary exodus from rural life into the world of Oxford University, and all the ramifications that this brings. 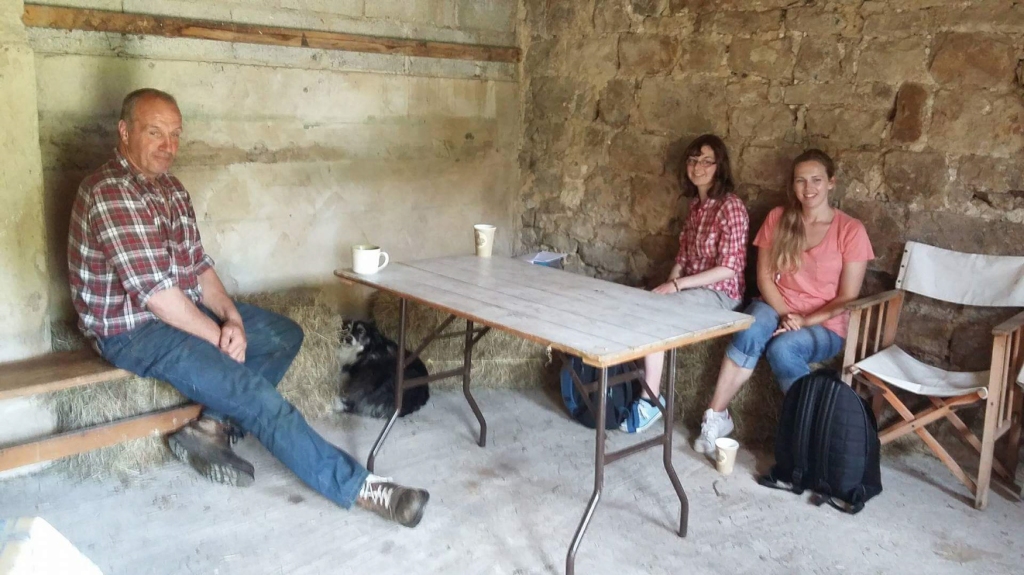 So what did I achieve from being a part of Voices from the Land?  Firstly, it gave me a chance to experience meeting new people in an unfamiliar environment and honing my interviewing and researching skills.  Secondly, it gave me more opportunities to write, and reflect upon what I had seen and heard.  However, it did much more than this, as it reconnected me back to the natural world.  I spent more time in the Yorkshire Dales National Park last summer than just when I was interviewing farmers or meeting the staff at the Dales Countryside Museum.  I went camping on the purple-heathered moors near Reeth with my daughters.  I went to an agricultural show at Muker.  I walked the Aysgarth Falls trail and spent an afternoon at Middleham Castle.  I saw Lucy Pittaway’s exhibition of Dales-inspired art and became obsessed with these prints; I now have several hanging up at home.  I love the bright pastel colours of these because they evoke the happy times I spent in the Dales and the vivid scenery that surrounded me.

“The Dales is no longer a social and cultural other – it is part of my experience of the world, and thanks to Voices from the Land, I will continue to benefit from the connections and experiences I have enjoyed due to my involvement in the project.”

This project opened me up to all the Dales has to offer.  Next year I am incorporating ecology and the literary depiction of the landscape and natural world into my final year project, which will form part of my final degree classification.  The Dales is no longer a social and cultural other – it is part of my experience of the world, and thanks to Voices from the Land, I will continue to benefit from the connections and experiences I have enjoyed due to my involvement in the project. 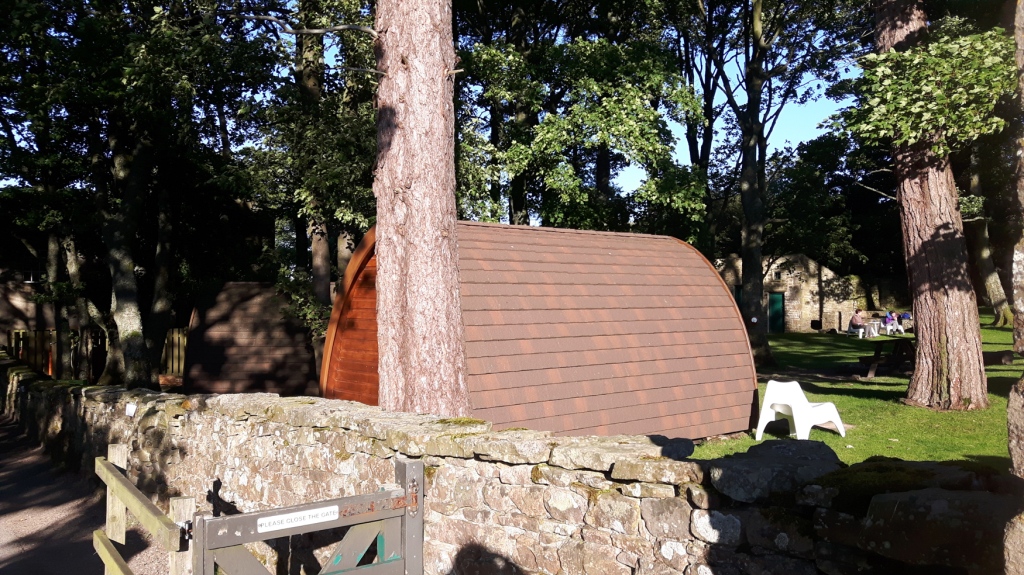 I am a hill farmer from Baldersdale Yorks/Durham Have you read A Countrygoer in the Dale by Jessica Lofthouse.Teesdale by Douglas M Ramsden A Year in the Life of a Field by Michael Allaby (although this is a field in Cornwall it is akin to our pasture and moorland ) Should you be this far north and wish to visit a dales farm with stinted moorland attached please contact me you are very welcome to come and browse my small collection of ‘dales books’ and fo course look round

Thank you very much Rosemary – all great titles and we haven’t read all of them, so thank you for the suggestions! I hope this will inspire other visitors to the site to seek them out and read. We would love to one day take you up on your offer and come and visit – please send your contact details via the contact page on this website and we can stay in touch via email. Very best wishes, Harriet