The morning is grey and the wind has picked up a chill on its way in over the fells from the east. A small huddle of farmers has gathered in the pens around the back of the mart and some aged tups and tup lambs are being shown. Bent heads, caps on against the wind, and eyes on the sheep.

This is one of many sales at Hawes Auction Mart. October is a busy month for buying and selling as farmers do their best to ensure that their flock will have the right rams or tups, and a strong collection of breeding ewes. Before the selling starts inside, the judging of sheep, in several classes, gives everyone a chance to see what will be going into the ring. 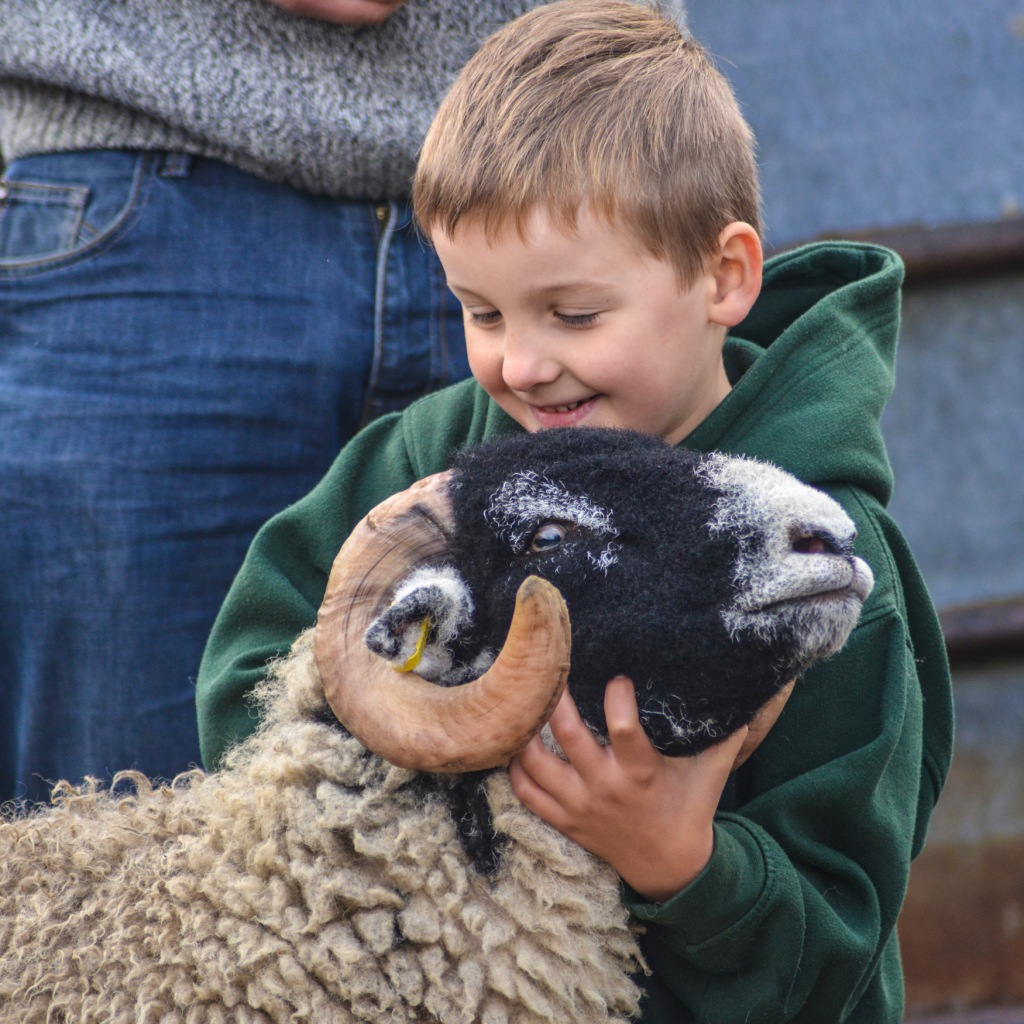 There are farmers here from Cumbria as well as Yorkshire either buying or selling, or getting a sense of what is out there. One of them, James Rebanks, is familiar to me, so I ask him for a few insights into what the judges will be looking for. We’re watching this year’s Swaledale tup lambs. The sheep have their fleeces coloured grey-brown. They have been rubbed with peat, and I’m told, ‘It’s what their mother’s would look like up there,’ by a farmer who points to the fells as he speaks.

~ The hair on the head needs to be coarse like brillo.

~ The back side of the legs needs to be black on the shank, right up to the body, the hocks silvery, and the forelegs bonny and white.

~ On the head the eyes need to be surrounded with white, like spectacles. Different farmers will have different preferences for the extent of the white, and as the sheep ages it tends towards a grey, which is not a problem.

~ The black colour on the head and legs needs to be matt, not glossy.
The judges also look closely at the tups’ balls – each sheep is turned over and shown belly up and the judge has a feel of the big black ball sack. The wool here should be short and coarse, and I notice that on some, it is long and bedraggled.

Most of the people here are men. There are a few flat caps around, jackets green blue and grey a mixture of fleece tops, raincoats, Barbour coats and tweed. The wind is cold and I’m pleased of my thermals and hat.

In the tup lambs line up the winners have been selected. A prize goes to a tup being held by a young boy in a green hoody, jeans and wellies. He’s beaming with pride. This tup comes from a ewe his father gave him – so this is the child’s winner. It seems that he’s hooked and his future is mapped out before him.

Swaledale Rams in the pens before the sale

When the judging has finished everyone moves inside where the sheep are in individual pens. Farmers are milling around, taking a look to see what’s on offer, and catching up with one another. I speak to one farmer, who’s with a tup he’s holding for Tom Hutchinson, who has recently featured on the film ‘Addicted to Sheep.’ He tells me that he remembers the time before tractors, when his family would use a horse and sled to go out onto the moors in winter.

In the ring, tups are led in one by one and the auctioneer reels off their qualities to the crowd before getting the bidding started. ‘That’s a good old tup,’ he says of one, ‘tupped twenty-five gimmer and more …’

I find it difficult to spot who is bidding but the notice one: a tip of the spectacles held in one hand. Then a rise from another man, given with a glance with the eyes; the auctioneer suggest a further hike in price, but there’s a shake of the head from him, and I can’t spot who it is that is keeping the price going up.

The prices per tup are ranging from 70 to 1600 pounds. Some go slowly, others are clearly sought after. One rises by a hundred at a time and has reached one thousand in less than a minute. ‘Perfect mouth on that. Thousand pound of anybody’s money for that.’ The tup goes, in the end, for thirteen hundred.

Each tup is accompanied in the ring by its seller, who has a set and focused face: no big smiles, rarely a glance up to the crowd, eyes on the tup. He or she will break occasionally to tell the auctioneer something, but mostly there’s a keen focus.

The auctioneer’s voice is an endless stream, and at the end of each sale he clears his throat with a rasp that’s like dragging the back of a shovel through the sawdust over concrete. 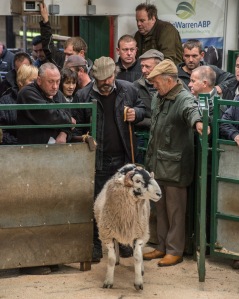 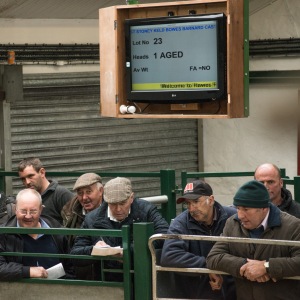 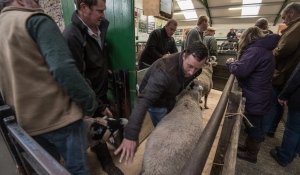