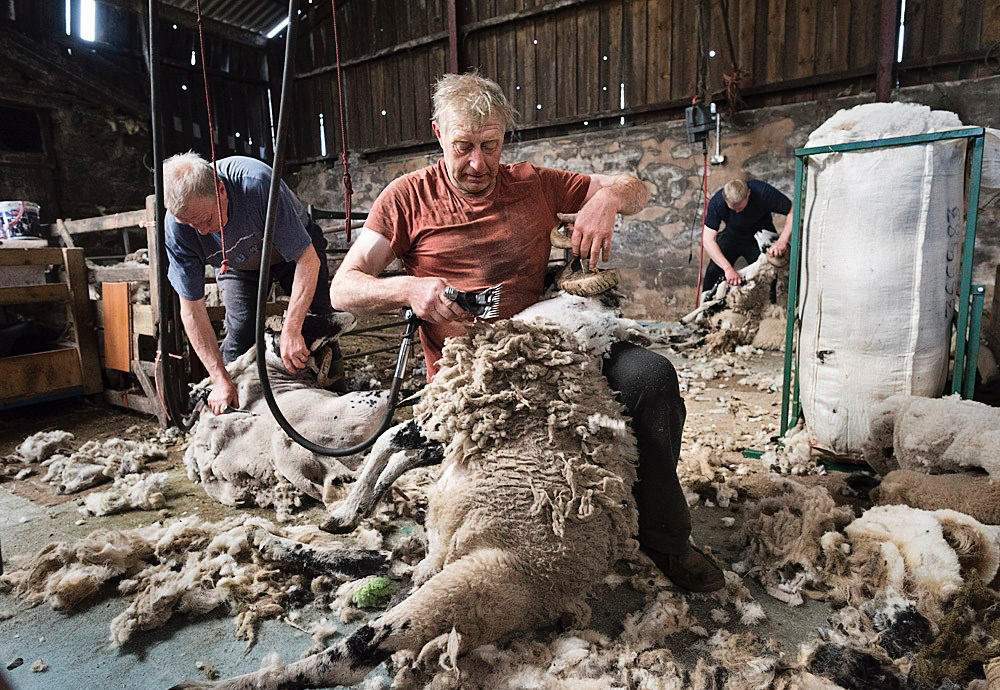 Over the past three months I’ve been able to get close to some of the everyday work on a Yorkshire Dales sheep farm, following the activities of the Calvert family at Hoggarths Farm in Swaledale.  After the pressures of the lambing season came a bit of relaxation and socialising at the end of May in the form of the Tan Hill Sheep Show. But then come the next tasks in the farming calendar – haymaking and sheep shearing. Haymaking should now be well underway at Hoggarths Farm, but intermittent rain has meant that on many days the grass has been too wet to cut or bale. So haymaking is behind schedule and eyes are constantly on the weather forecast for dry interludes suitable for grass cutting.

Similarly sheep cannot be sheared if wet, so there’s a constant battle with the weather. On the day of my visit it’s dry enough for the shearing to continue and Ray Calvert also hopes they might get out later in the day with the tractor for some grass cutting. However, the first task is to shear some males, or tups, that are already gathered together in the barns. First up for a trim are the older tups, at least one of which is around ten years old. Good tups are vital for successful breeding and so the best animals, which produce the highest quality lambs, can remain on the farm as breeding stock for several years. Farmers know which tup fathers which lambs because the mother sheep is marked during mating by coloured paint on the tup’s underside. 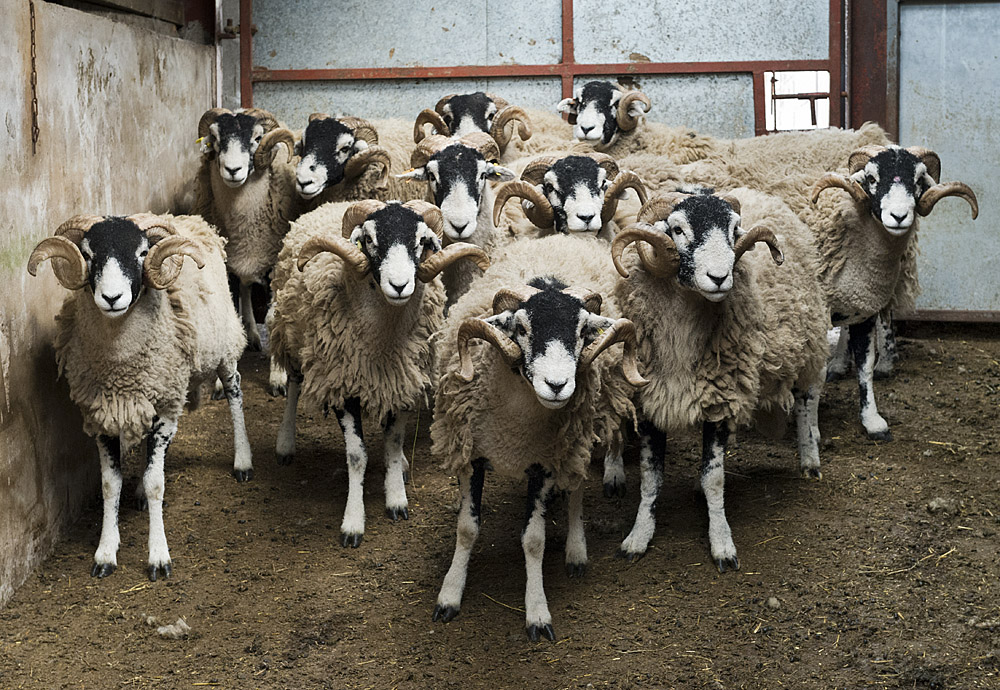 Today shearing is taking place inside a barn on the farm, but on other days it can take place out in the fields thanks to modern technology. The machine shears, known as handpieces, are like a large version of the electric clippers found in a gents barbers and are powered from the battery of a tractor. So the cutting can be undertaken outdoors when needed, taking the equipment out to the sheep flocks.

Shearing is one of the most physical and tiring tasks on a farm and shearing hundreds of sheep is a big task. Cutting the heavy fleece from the sheep has to be done for the animal’s welfare. In the past, when wool was widely used for clothing manufacture, fleeces were valuable commodities. Now, with so much clothing made from synthetic and other fibres, shearing tends to cost more than the value of the fleece. A lot of wool now ends up in manufactured carpets. Today the real value of the sheep is as meat. 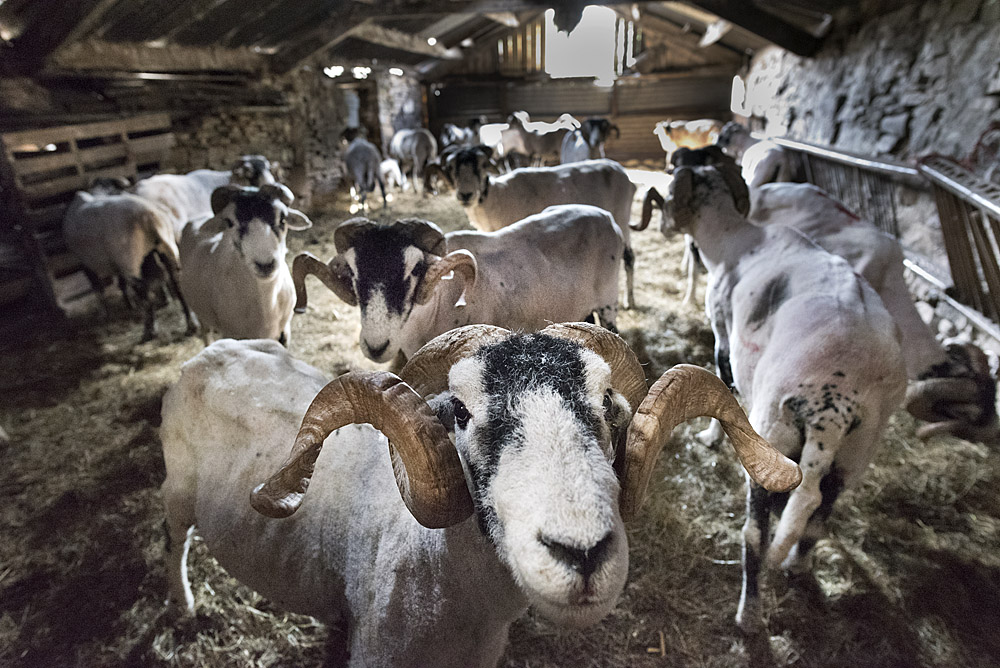 In the barn Ray, Chris and Andrew Calvert set to work, shearing the fleeces off the tups in one piece, which is quite a skill. Some sheep are fairly acquiescent and even look relaxed during the process, while others put up a bit of a struggle. Chris chuckles at one point when he realises the other two have left him the biggest tup to shear. As each sheep is shorn it is put back into a pen, looking extremely thin, white and bald. Removing the heavy fleece completely transforms the sheep’s appearance. Some of the fleece around the head has to be removed manually with blade shears, as the electric handpiece can’t get in around the Swaledales’ curved horns. Back in the old days the whole sheep would have been sheared by hand with the blade shears, which resemble a large pair of scissors. 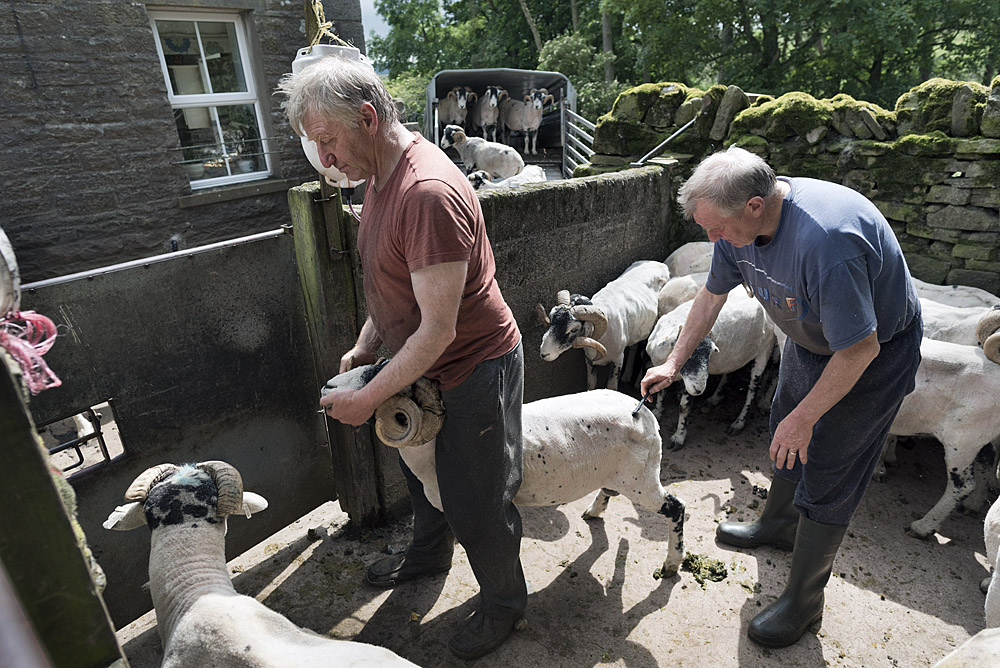 With its fleece removed there is the opportunity to check each animal’s health and treat any problems. A common ailment is foot rot, which causes the animals to go lame. Rotten hooves go soft and have to be trimmed with shears and treated with medication that dries them out. In bad cases the sheep may need to stay inside the barn for a few days until the hoofs dry out. Sometimes sections of the horns have to be sawn off if they start in-growing into the animal’s skull. Another issue may be wounds from the animals fighting. 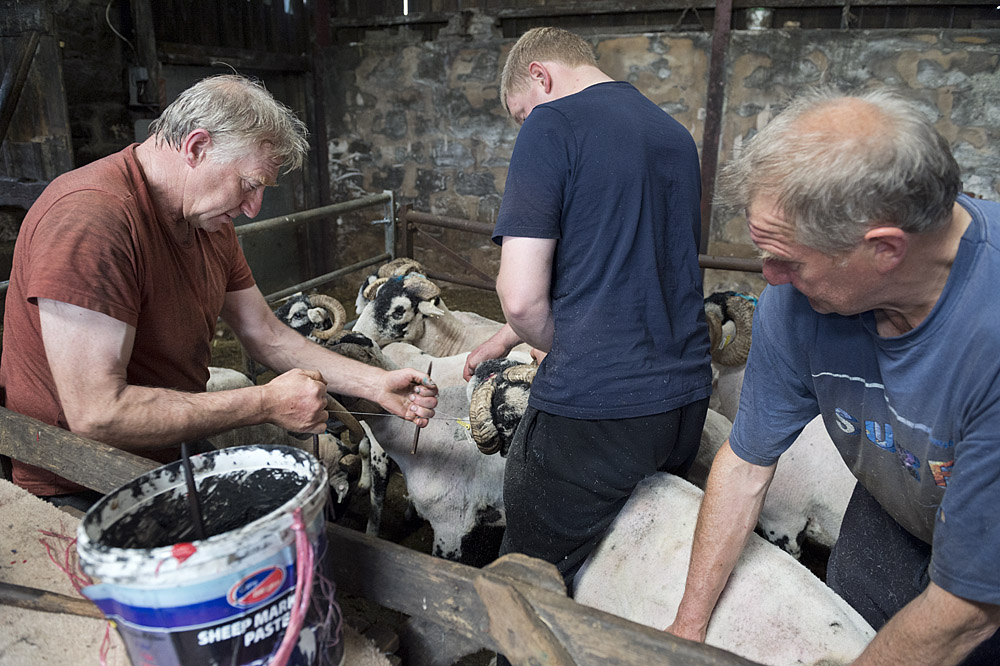 As batches of tups are sheared they are led out into the outside pens where they are given oral medication against diseases and their backs are marked once again for identification – obviously any original paint marking has been removed along with the fleeces. The tups are then loaded onto a trailer and the tractor transports them back out to the fields and moorland.

It’s been hot and sweaty work manhandling the sheep and a change of shirts is necessary before resuming work. Then the process begins again. Ray, Chris and Andrew ride their quad bikes down to a stretch of moorland just up the road from the farm and a large flock of ewes are very efficiently rounded-up in a matter of minutes with the help of several of the farm’s eager sheepdogs, who intuitively know what they have to do. The sheep are then herded along the road back to the farm for the start of the next lot of shearing. 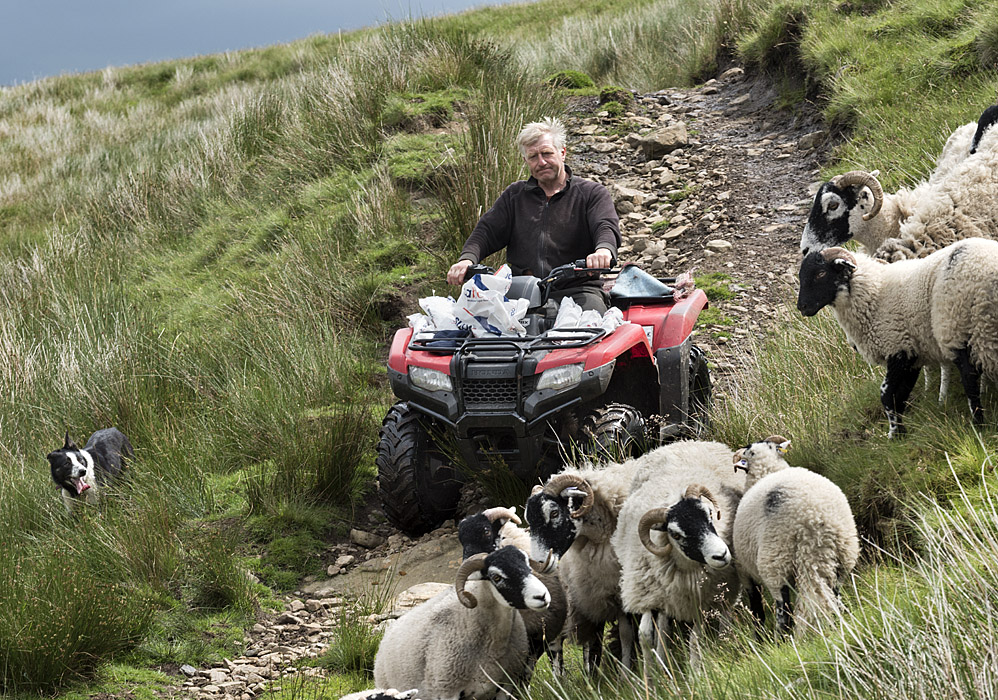 It’s tough and repetitious work that has to be done. I had to leave the farm at lunchtime, so I don’t know whether the afternoon was entirely occupied with more shearing. By lunchtime I think Ray was really hoping that the weather would hold so that the heavy shearing routine could be interrupted by a bit of haymaking. This would at least involve being comfortably sat on the tractor! 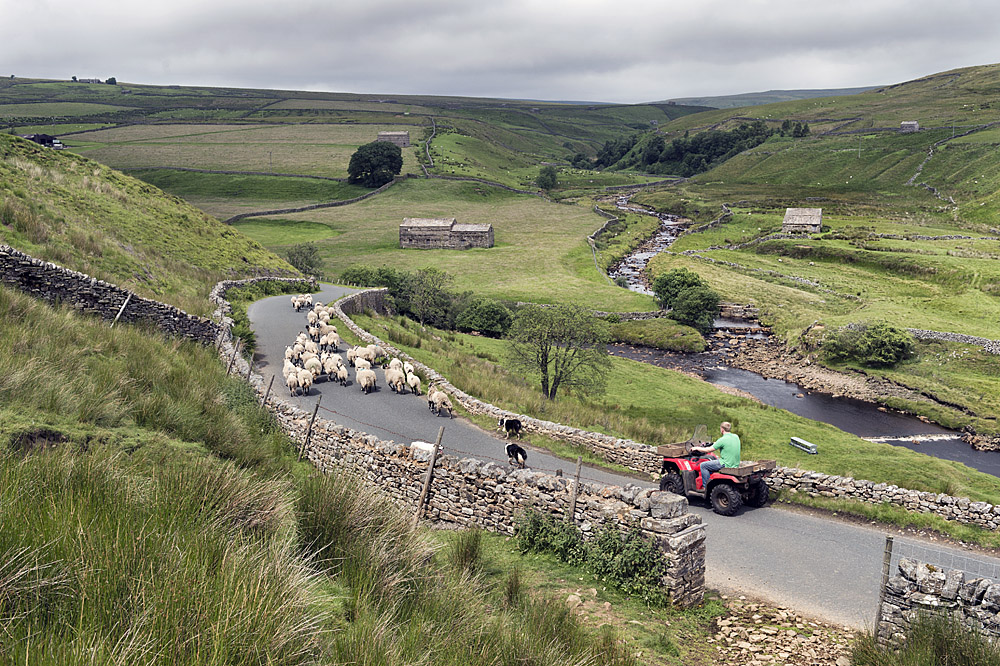